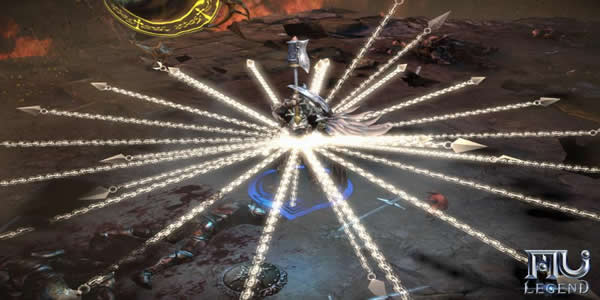 In MU Legend, the fans did not deem that the wings were broken and therefore they were redesigned. You can upgrade your wings three times, giving you bonuses like a faster regeneration of your health.

There is a PvP Arena, where you can fight up to ten times against another player. After each won battle you have the choice to take your prize or fight for a bigger reward. Webzen promises us further guild vs guild and 3 vs 3 for the PvP fans.

The Dark Lord class has been modified, there are more maps and the cities have got more stores. The level cap is at level 65. Then you can upgrade your Soul Level to a level up to 500. Your Soul Level gives you extra bonuses, including your attack and defense.

The next stage is the Open Beta, which will start shortly. Webzen keeps the date even more secret, but it's at least in September. However, Webzen has opened a new page dedicated to the Korean version of MMORPG MU Legend. The long-awaited the Emphasizer class have been released on August 10. Recent trailer of the class Emphasizer, you can click here to watch.

As a MU Legend player, chances are that you will in need of MU Legend zen while playing the game. In fact, you don't have to waste a lot time to get plenty of MU money in game.

The Character Development In MU Legend For Newbies

Webzen decided to attack the nostalgic players and bring the MU Universe back to life in a new, free version. Can this MMOARPG be able to protect itself against the competition?